Patients with depression definitely have a higher prevalence of sexual dysfunction than the general population. Studies have shown that 35 to 47 percent of patients with depression have sexual problems. One study even found that more than 70 percent of depressed patients had a loss of sexual interest. (Interestingly, none of the patients in this study were taking any type of antidepressant medication.)These patients also reported that the severity of the sexual problems was worse than any other symptom of depression.

The converse is also true – that is, patients with sexual dysfunction have a higher prevalence of depression than the general population. In two large studies among male patients at the Johns Hopkins Sexual Behaviors Consultation Unit, approximately one third had a comorbid psychiatric diagnosis. One study even found that 82 percent of men with erectile dysfunction also reported symptoms of depression. 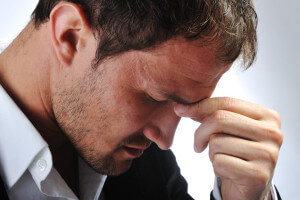 Is there a physiological reason why depression could cause erectile dysfunction? The sexual urge that causes men to have an erection begins in the brain. Chemicals in the brain called neurotransmitters send signals down the spinal cord and into the nerves in the penis. The nerves release another chemical (nitric oxide) which stimulates blood flow to the penis and causes the surrounding tissues to expand and harden. When there aren’t sufficient brain signals to stimulate the blood flow needed to induce an erection, erectile dysfunction occurs. Depression (as well as fear and anxiety) causes these brain chemicals to get out of balance, so could certainly be a contributing factor. Low levels of neurotransmitters can also dull a person’s ability to experience pleasure, both physical and emotional.

Low testosterone levels, which are common in older men, are also known to cause changes in sexual function, including loss of sexual desire, erectile dysfunction, decreased frequency of morning erections, and infertility. Low testosterone levels are also associated with depression, moodiness, irritability, and lack of self-confidence. Testosterone levels usually begin to drop at age 30 and continue to decline throughout adulthood at about 1 percent per year.

What about antidepressant medications? Studies have shown that up to 40 percent of people taking common antidepressant medications report a decline in sexual satisfaction. Among patients taking selective serotonin reuptake inhibitors (SSRIs), the percentage is even higher. Studies have shown that treatment-emergent sexual dysfunction ranges from approximately 30% to 70%.

It should also be noted that most patients have difficulty discussing sexual dysfunction with their health care provider, so the number of sexual problems is probably under-reported. Patients will often acknowledge problems only when specifically asked, and very frequently physicians fail to ask about such issues. In one study it was found that patients taking SSRIswere 4 times more likely to acknowledge sexual dysfunction if asked directly by their physician.

The high prevalence of sexual dysfunction associated with SSRIs can certainly reduce treatment effectiveness. Intolerable side effects are frequently a reason for noncompliance. Since noncompliance – especially premature discontinuation of medication – can cause higher rates of relapse and recurrence, there has been increasing attention being devoted to the management of antidepressant induced sexual dysfunction.

There are several strategies for managing sexual dysfunction caused by antidepressant medications. These include decreasing the dosage of the antidepressant, instigating “drug holidays” where the patient does not take the medication for 1-2 days, and switching to an alternative medication. .

What are the warning signals of depression and erectile dysfunction?

Depression is a condition characterized by persistent sadness, feelings of hopelessness, and a pessimistic outlook. Common symptoms include low self-esteem, fatigue, apathy, loss of interest in sex, and lack of pleasure in sex. There may be strong feelings of anxiety or frustration. These symptoms often occur after a stressful life event such as the loss of a job, financial burdens, the illness or the death of a family member, or relationship issues.

The first step in getting help for erectile dysfunction and depression is to realize that it is not simply a normal part of aging or stress. A man should have a complete medical examination and be open with his heath care provider about his sexual problems.

Although the relationship between depression and erectile dysfunction is often blurred, the treatment of one condition will often improve the other. Psychotherapy (or “talk therapy”) with a licensed and trained mental health care professional may be recommended. Types of psychotherapy include couples therapy, individual therapy, or group therapy.

If the depression is caused by a stressful life event, it may be helpful to distance the patient from the source of stress, if possible. For those with schedules that are packed from morning till nighttime, it may be necessary to eliminate unnecessary activities in order to provide more down time. Sometimes getting outside in the fresh air and being around nature can have a positive impact.

Partner support is also critical. The patient and his sexual partner should talk openly and honestly about the situation. The partner should learn as much as possible about the medical condition and accompany the patient on doctor visits whenever possible. It is important to avoid being judgmental and to adopt a positive approach. In addition, the partner should watch for lifestyle issues that could exacerbate the condition, including tobacco use, excessive alcohol consumption, and illicit drug use.

With a team approach, the good news is that both erectile dysfunction and depression can be treated successfully.

1) Breaking the Link between Depression and Erectile Dysfunction

2) Impotence and its medical and psychosocial correlates: results of the Massachusetts Male Aging Study

5) Somatic symptoms in primary affective disorder. Presence and relationship to the classification of depression

For your convenience, we have compiled a dictionary of the terms most frequently encountered on our site